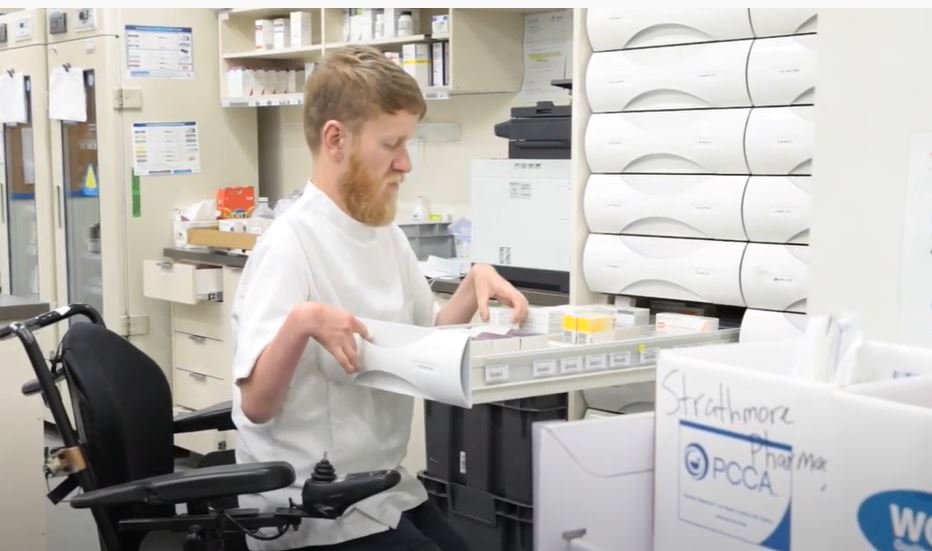 When I applied to enrol in a Bachelor of Pharmacy back in 2012, the last thing on my mind was whether I’d be able to find employment at the end of the degree. All I could think of was how I’d survive living independently for the first time, who I’d meet, whether I’d be able to balance a social life and university work (I did, just) and what I was going to teach myself to cook.

But sure enough, there I was, four and a bit years later, watching the entirety of my cohort roll straight out of their graduation gowns into the next step of their professional career, while I was going door to door dropping resumes, trying desperately to find a crack in this seemingly impenetrable wall of disability employment.

To become registered a fully-fledged pharmacist, one must not only complete four years of a Bachelor of Pharmacy (or less if you’re doing fast tracked), but also complete a year of full-time work as an intern after graduation, along with a significant amount of extracurricular study, assignments and exams.

Much like the majority of my fellow pharmacy students, I started applying for intern positions from partway through our final year of university. We prepared for interviews together the same way we did for exams – drawing together with several cups of tea, coffee, and snacks, discussing the best examples each of us had experienced for a textbook STAR response to any question we could be thrown.

We practiced questions as interviewer and interviewee together, researched the bigger organisation’s values and objectives and made sure we had examples of when we had demonstrated such values ready to fire back if we were asked. I was nervous but as prepared as I could have been to interview as well as I could.

By the time all the advertised positions had been either filled by a colleague or the job advertisement just mysteriously retracted, I was starting to get a sickening and embarrassing feeling – kind of like being the kid who got picked last for the sports team, except I hadn’t even been picked.

Scrambling to try and get a foot in the door – any door – I started cold calling pharmacies I knew hadn’t taken an intern yet (I’d done my snooping around the rest of my class and made a spreadsheet of remaining pharmacies in Tasmania).

Over the phone, these were perfectly amicable conversations, yes, it’s nice to hear from you, of course we’d be open to taking on an intern, we haven’t had one in a while, why don’t you drop by on Tuesday and bring your resume, etc. At this point I haven’t mentioned a wheelchair because well, why should I?

And yet, most conversations taken in person would see the manager and/or owner meeting me and, well, it’s hard to describe, but you can see the change in someone’s face and demeanour – similar to when you get a gift from a distant relative and you make a polite gesture and thank them even though you both know you’re never going to wear the pair of novelty festive socks you’ve been given. A pharmacist I met on such an occasion said, “… So, you’re obviously in a wheelchair…”
“Yes.”

Needless to say, that conversation didn’t continue in a productive manner, and I wasn’t offered a job there.

All up I’d say I’d applied and cold called for over 40 positions before I decided it was time to go back to the drawing board. I enrolled a few business courses at university to try and give my resume a boost and took on some part time volunteer work at Alcohol and Drug Services, working with a close-knit pharmacy team to supply medication to clients on the opioid pharmacotherapy program.

Asking for help can be difficult at the best of times; most people with disability are fiercely independent as possible (well I know I am), so the prospect of one, admitting there is a problem, and two, asking for help doesn’t always sit well. I remember being in denial for the longest time that this was something I did not need any help with, although unfortunately I did.

Part way through 2017 I had the opportunity to work with the Australian Disability Clearinghouse on Education and Training (ADCET), making a video about my experiences mainly to raise awareness that employment for graduates with disability was an issue that needed addressing, as well as indirectly hoping it might catch someone’s eye and I would have a shot at landing a job.

Sure enough, the video found its way across the country and in a very short period I had several genuine offers from wonderful people (peppered in with some false promises and keyboard warriors to be sure). In the space of a week, I had three pharmacies in three very different settings who were ready to take me on which was overwhelming after 18 months of rejections. I chose a job in Melbourne in the end, a few minor physical modifications to the workplace later and I was registered in no time.

I’m fortunate enough to only need minimal physical accommodations if any, but why should that be a problem in the first place? By ruling out people with disability, employers can be missing out on qualities they may not find in other candidates. People with disability often have creative ways of thinking and problem solving, coming from a significant part of, if not complete lifetime of needing to do so to thrive in life in general.

These skills are not to be taken for granted and can contribute wonders to a workplace. On a day of training for a new job recently, the pharmacist with 50 years of experience training me told me “You don’t think like most people,” which I absolutely took as a compliment.

The path to employment for me was a rocky one, I’m certainly happy with the way everything has worked out, albeit it a tumultuous trip. If I could change one thing in the journey, it would be for potential employers to keep an open mind at all times. This is obviously much easier said than done – much like racism and sexism, ableism isn’t going to disappear overnight, it requires a system approach that will take time to resolve.

In Australia, there are more than 80,000 people with disability undertaking university studies. This represents a huge pool of talent, and, from my own experiences, I wonder how many of these students might be overlooked for a job that they are qualified and capable to do, on the basis of perceptions about disability.

Organisations like ADCET are spearheading this campaign and doing excellent work to raise awareness to make the process of tertiary education and graduate employment better for people with disability and I revel in any opportunity to work with them.

I also regale anyone who’ll read or listen to my tale, in the hope that it might push some people (or even one person) to keep their minds open when it comes to employing a person with disability.

I might sound jaded about all of this, and I absolutely am (some days more than others), but I know there are good people out there, I’ve seen them, met them, worked with them – it’s just a shame that they’re so hard to come by. The interest generated by ADCET’s video showed me there were still genuine people out there, employers who wanted to give me a fair chance to prove myself when very few others were willing to do so.

One of my current satisfactions, having secured ongoing work I very much enjoy, is getting headhunted on Linkedin by organisations who previously rejected me as an intern. It’s a special kind of buzz but it’ll cheer me up no matter what kind of day I’m having.

So, what can employers do right now? There is no shortage of work to do in resolving this.  Employers can invest in making application processes, buildings, and technology accessible and welcoming to ensure that all applicants have similar opportunities to work.   However, most critically, keep an open mind as an employer, as there is a world of talent and skill in people with disability that is being disregarded because of misguided perceptions around disability.