From course to career: students spill on what works 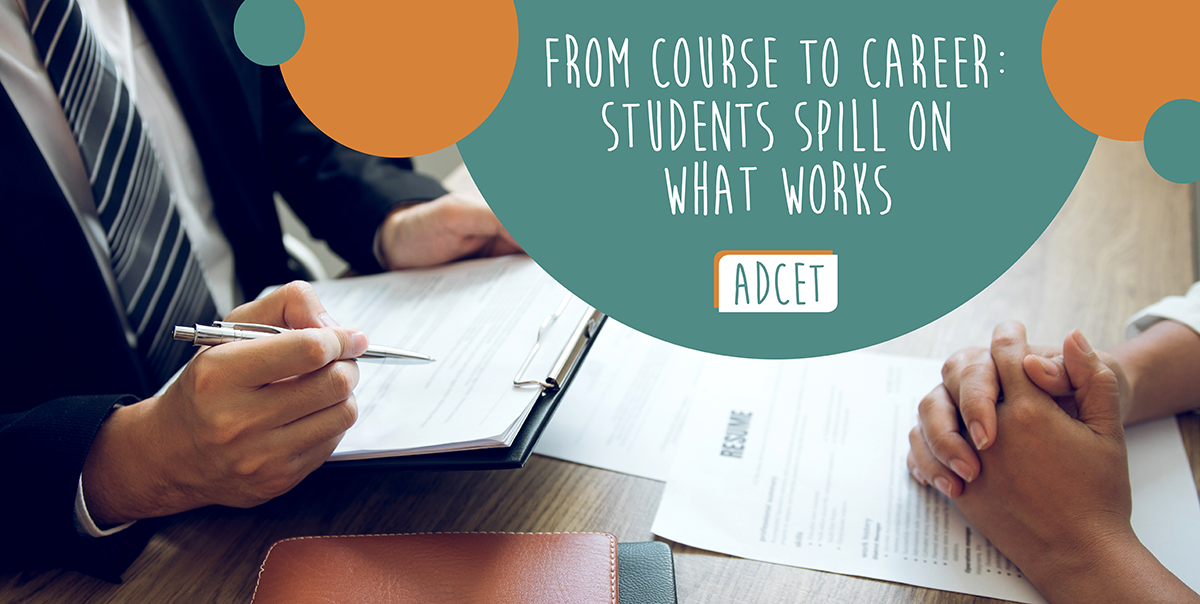 shines a spotlight on career development and the services and practitioners that help people to make it in their dream career.

This Careers Week, we’ve decided to turn the tables a bit and ask students, Joshua and Meltem,  about what they believe best helps them when navigating the transition from a course to a career. We hope you find their words informative and helpful as you go about your daily practice in creating strong employment outcomes for students with disability.

Joshua studied a Bachelor of Information and Communications Technology (BICT) at Western Sydney University (WSU). A self-confessed IT geek, he said the STEM path came naturally to him after high school. He also considered a career in the Air Force; Joshua has autism, and said he believed this would have been a barrier to enlisting.

“Looking back now, I think I probably made the right decision in going down the path I took,” he said.

Reflecting on his journey from learner to worker, Joshua said the most helpful advice he has been given is to ask for help when he needs it, “and take whatever opportunities come up in my job hunt”.

“I tend to prefer to try and do things on my own before asking for help, which can be beneficial in some applications but when you’re a fresh graduate trying to look for work, that mentality doesn’t always help,” he said.

“I knew I needed outside help to succeed in my professional career and so in 2018 I reached out to the careers team at my university for help in the job-hunting process - which perhaps turned out to be one of the most beneficial decisions I have made in my life.”

Over his job-seeking journey Joshua said he received lots of positive feedback from potential employers. He names Accenture, IBM and PwC as standouts here. He also took advantage of networking opportunities with other graduates, which helped him to learn how to break the ice in front of other people. Another positive experience was in going to large careers fairs, which he said helped him discover a career path and forge the connections with employers that he would ultimately need.

“I think the biggest roadblock that I have had in my journey is tailored support,” he explained.

“Before I met Dragana in the University Specialist Employment Partnerships (USEP) program at WSU, I wasn't really able to find many opportunities for work through my previous disability employment specialists. Most people who come through to Disability Employment Services (DES) providers are often not university graduates and are usually lower skilled; nowadays, with higher education becoming much more accessible to Australians I think there are definitely a lot of people with diverse abilities falling through the gaps because DES providers are not able to support them in finding suitable work as much as they can.”

Joshua has faced both benefits and roadblocks in his job hunt, but looking back, recognises that he has more confidence in his abilities now.

“I still remember my first assessment centre with QBE in late 2018, being completely nervous and somewhat unprepared for whatever curveballs were thrown at me by the interviewing recruiters. By the time I found work in late 2019 - early 2020, I was much more confident and knew what to expect through the overall assessment process!” he said.

Joshua is part of a cohort of people that historically has higher unemployment than the general population: the Australian Bureau of Statistics (ABS) reported in 2018 that the unemployment rate for autistic people is six times higher than the national average.

“I feel that if these providers outside of the universities and colleges are given the right tools and resources to support university graduates with diverse abilities, it would make a big difference in acceptance and employability of people in the same boat I once was in,” he said.

He recommended that careers advisors and disability practitioners “never give up” in their work in encouraging people to pursue their dreams.

“Their encouragement is what drives us to succeed,” he said.

“Careers advisors who go above and beyond to help the students they serve - like the folks who helped me at WSU - are a really valuable asset to students like myself. I also think that maybe having careers advisors with a broader skillset (i.e. coming from different degree backgrounds) would also be helpful in assisting people with diverse abilities find work - not every autistic person is a STEM super nerd; I should know, I am friends with a couple of ‘auties’ who have interests in other fields like design!”

Meltem is a Bachelor of Science graduate from Western Sydney University.

She went back to university for a career change after having worked in banking and finance for many years, and didn’t learn until then that she had dyscalculia and anxiety.

“I knew numbers weren’t my thing, so I would focus on my strengths,” she said, explaining that she may not have picked up her dyscalculia earlier because there were people around her who could assist with the more numerical-based tasks in her role.

After trying a fitness instructor course, Meltem realised she enjoyed biology and physiology and decided to pursue a Masters in dietetics. To ensure she would be eligible for this, she commenced her Bachelor of Science. She majored in biochemistry and molecular biology as well as nutrition and physiology, believing this would ensure she was eligible for the Masters – but she missed out thanks to a technicality.

“They didn’t accept me because on the criteria list it said one food science unit, which I had done, but when I applied they said the one I had done was foundation and they needed intermediate. They should have been clearer on their requirements - it was devastating,” she recalled.

But it was during her bachelor’s degree that she realised she had a disability.

In her second year, Meltem took a genetics unit. At the time, she was also tutoring other students in the subject, all of whom passed well – but when it came time for her equations test, Meltem failed.

“I realised it was because I turned my numbers around at the beginning. I showed my teacher and he was kind enough to reassess it based on my formulas so I passed, but that was the last straw for me, because that happened throughout my academic career and I didn’t know what it was.”

Fortunately, Meltem was working at the time for a psychologist, who suggested she might have “dyslexia with numbers”.

“I went and got tested and it was black and white, I had dyscalculia,” Meltem said.

This created anxiety around a statistics course was required to do as part of her degree, which she put off until her final year. Meltem said the university put her into the Academic Integration Program (AIP) which allowed her extra time on the exam, and she also had access to a math tutor who helped her in the subject.

These two factors helped her to relax and feel safe during her exam and reduced her anxiety.

“I ended up getting two marks shy of a high distinction. I was crying, I was really happy. It gave me so much confidence as to what my options were career-wise,” Meltem said.

After graduating and missing out on the Masters, Meltem began applying for “job after job, any job” – but she never heard back from any of them. She became depressed about her prospects. Towards the end of the year, she received an email from Dragana,  in the University Specialist Employment Partnerships (USEP) program at WSU,  who was assisting AIP students to apply for jobs. Meltem said she jumped on the opportunity and replied within minutes.

Dragana has since worked with Meltem on her resume, helping her to see her strengths and recalibrate her applications with these in mind.

“Every time I insinuated anything small about myself she called me out on it and reminded me it wasn’t the case and reminded me of my strengths and to focus on that,” Meltem said.

One particular instance where Dragana went above and beyond came to mind for Meltem; when she missed out on a particular role that she had had her heart set on, Dragana found someone who had been on the selection panel and organised a meeting between her and Meltem to discuss her application and what she could do better next time.

Meltem has since found a role that she loves, and attributes her confidence to her careers advisor. They still catch up every fortnight and Dragana provides coaching and mentoring on general work-related issues. Based on her experiences, Meltem said she believes careers practitioners should possess a number of skills that will allow them to better help students as they transition into the workforce.

She said empathy and communications skills are critical, but said that what made her experience different was her advisor’s willingness to go the extra mile.

“Dragana went behind the doors and reached out to build those networks in order to support me. I know she did the same for some of her other clients as well. She went out of her way to understand where I’m trying to go. She went there as an advocate, her advocacy is next level and I think that comes from a genuine, authentic passion for what she does. If you do have that, showcase that because I think that speaks volumes.”

Despite the challenges she has faced, Meltem still has a thirst for university and hopes to complete a Masters in Public Health, majoring in biostatistics, in the future.