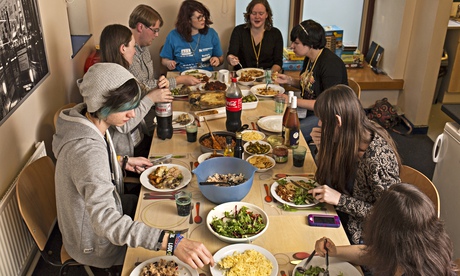 Students with autism get cooking
instruction at Birmingham City University's
summer school, and then sit together and
eat what they've cooked.
Photograph: David Sillitoe for the Guardian

"I am quite a fussy eater. I only like avocado and boiled egg," Stefania Hanson explains, as her friend pushes a trolley past the frozen peas. They're navigating their way around Asda in Birmingham's Perry Barr, finding ingredients for a cookery session.

The activity is part of a three-day summer school for students with autistic spectrum disorders (ASD) who are starting university this month. Run by Birmingham City University (BCU), the programme helps those who are academically very able, but may not have some of the social or life skills that university demands. "It's also a chance for the students – who can have very specific dietary or sensory needs – to have a practice run before the real thing," says Karin Qureshi, manager of counselling and mental health at BCU.

The number of autistic students going to university has soared in recent years, growing by more than 200% in five years – and this figure does not include students who haven't disclosed their disability. Academics believe the rise is driven by greater awareness of autism and better opportunities for those who have the condition to reach their potential at school.

"Although diagnosis can be problematic in certain parts of the country, it is generally easier than it was in the past," says John Harding, head of the disability resource centre at Cambridge University. It had 26 students with autism in 2009, and now has 122.

"Most autistic university students have high-functioning autism or Asperger syndrome – rather than classic autism," explains Vicky Neale, the National Autistic Society's student support coordinator for London. Students with Asperger's aren't all replicas of The Big Bang Theory's Sheldon Cooper, Neale adds – though the highly intelligent, socially aloof character is seen as a hero by some.

Asperger's is associated with people of average or above-average intelligence. They tend to have fewer problems with speech than those with classic autism, but may still have difficulties with understanding and processing language. This could mean they find it harder to understand instructions from lecturers, or to cope with living in student halls.

As more students are identified as autistic, academics are finding new ways to help them – from pet therapy to training for academics. An increasing number of institutions – including Bath, Cambridge and Aberystwyth – offer summer schools to help students adjust to university life.

But autistic students are more vulnerable to dropping out than others. In 2011-12, 3.5% of students with a social communication disorder or autism spectrum disorder did not complete their course, compared with 2.6% of their coursemates. Dropout rates for autistic students who do not disclose their ASD are likely to be higher, says Harding, who adds that young adults are most likely to discontinue their studies during first term. "It's a difficult time for any student but particularly for someone with autism spectrum disorder who is coming into an environment that isn't as structured as previously."

Students are thrown into completely new situations where they are dependent on social cues to understand how they should behave. This can leave young people with ASD in a vulnerable position – especially when alcohol is involved. "Some young adults with ASD who come to university could actually be drinking for the very first time," says Dr Mark Brosnan, who is running a summer school programme at Bath University that offers guidance on safe drinking.

"One student, who shared his story with incoming students this year arrived on freshers' week and everybody was saying, let's have loads and loads to drink – so that's exactly what he did. He missed a lot of freshers' week because he was suffering with an almighty hangover."

Alcohol can be a concern for young adults with autism, including Hanson. "I'm not a fan of alcohol or the party environment," she says. "I want to make friends but I don't want to be stood in a really loud room with music banging." She is sensitive to loud noises – common among those who have ASD.

"It sounds odd, but when there's loud music, it feels like everything around you becomes muffled – and then all the sound comes on you at once." People with autism have meltdowns when their environment overwhelms them, she explains. "Your instinct would be to just get out of the situation if that happens," Hanson says, "but obviously if you're new to a university and don't know where you are, that's not advisable."

Most undergraduates are required to carry out group work as part of their academic course. This can prove problematic, says Jonathan Marsh, who has Asperger's and has just completed a computing degree at Teesside University. "I found it difficult when we worked in groups on projects. I didn't always know the names of the people that I was working with. One of the things that I found difficult was having to wait for other people to finish their part of the project before I could start mine. I just had to keep prompting them."

As well as having lessons on practical things such as cooking a meal or using public transport, summer schools give students an understanding of the skills that underpin many degree courses, such as teamwork. A session at Bath University examines why, if a group of students are doing a project together, someone might, for example, make jokes during the task – even though it isn't likely to help them finish their work on time. "It's highlighting that humour may seem frivolous and off task, but that it could have the benefit of enhancing the social experience," says Brosnan.

Because a person with autism may struggle to understand humour or a colleague's facial expressions, they can feel overwhelmed by human interaction – even when it's asking a tutor for help or clarification.

At Cambridge University, staff receive training on the ways to help autistic students keep up with work using recommendations developed by Harding after a three-year research project on autism and higher education. The project, based at the Autism Research Centre in Cambridge, advises that academic staff give unambiguous instructions to students, avoid last-minute changes to timetables, and make lecture notes available in advance.

Bournemouth has also introduced pet therapy, in collaboration with non-profit group Caring Canines, to help build students' confidence in social situations. Carolyn Atherton, an additional learning support tutor there, uses her dog Jack to help build students' interpersonal skills. "With a dog, because they're non-judgmental, they're able to make a relationship more easily. We had a student who was terribly nervous about doing his presentation, so I got him to do it to Jack, and he just gained in confidence."

Jack's work is forming the basis of a university research project, looking at the benefits of animal-assisted learning.

While universities' understanding of autism has developed greatly in recent years, Harding fears that the human support some institutions offer may diminish as a result of cuts to Disabled Students' Allowance, the grants given to students in England to help meet extra study costs incurred because of their disabilities. From September 2015, the government has proposed that DSA will only be given to support those with specific learning difficulties if their needs are considered complex – though the definition of "complex" remains unclear. It will no longer pay for standard computers for disabled students or for note-takers and learning mentors.

Sahil Singh Gujral – who was asked to leave 13 schools when growing up in Texas, and is now the first openly autistic student to win a Wellcome Trust doctoral fellowship – says schools and universities shouldn't waste the talents of students with autism. "The state education system needs to stand by autistic students, accommodate their weaknesses and emphasise their strengths – in part because autism is estimated to cost the UK taxpayer around £32bn a year."

More than a quarter of graduates with autism are unemployed – around twice the proportion of any other disability group, according to the Association of Graduate Careers Advisory Services.

For Harri, a student with Asperger's who is in her third year at BCU, university hasn't just been about studying and getting a job. "In school I was bullied quite a bit for being weird, but at university it's never been an issue. At university, it's the first time I've been able to be open about it [autism]."